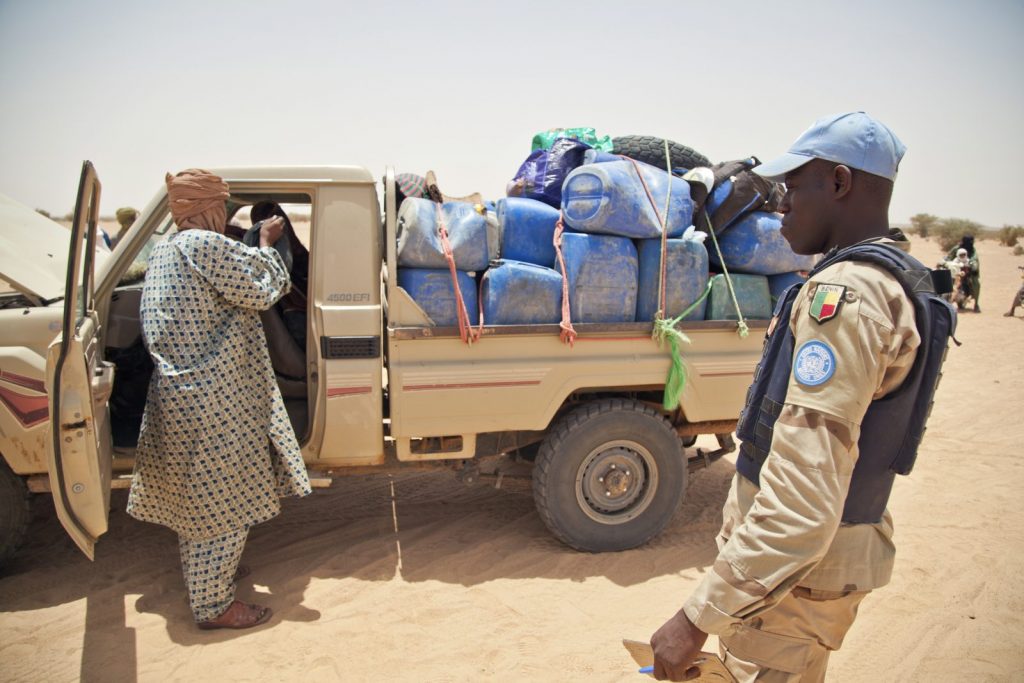 A troubled yet needed Mission

Until 2016, the UN Multidimensional Integrated Stabilization Mission in Mali (MINUSMA) was a relatively successful peace operation. It managed to improve stability in Northern Mali, decrease the number of civilians killed in the conflict, and allow large numbers of displaced persons to return home. MINUSMA also supported the organisation of the 2013 elections and assisted the peace process culminating in the 2015 Agreement for Peace and Reconciliation in Mali, also known as the Algiers Agreement. Many of these achievements are still standing and are particularly impressive considering the size of the country, the logistical challenges, the hostile security environment, and, in spite of a $1 billion budget, the relatively limited resources for implementing its mandate.

However, since 2016, MINUSMA’s effectiveness in terms of stabilisation and the protection of civilians (PoC) has decreased. Violence has increased as jihadist groups have been attacking MINUSMA, the Forces Armées Maliennes (FAMA), and the Algiers Agreement signatories. As a consequence, MINUSMA has sustained an extraordinary number of fatalities compared to other recent UN peace operations. In addition to the challenging situation in the North, Central Mali has destabilised significantly, particularly since 2016. In the regions of Mopti and Segou, the growing presence of and attacks carried out by jihadist groups have triggered the further retreat of an already relatively absent state. Jihadist activities and retaliation by government forces have stoked the proliferation of self-defence militias and a vicious cycle of inter-communal violence that has reached unprecedented levels. MINUSMA has only been mandated to help the Malian Government address the situation since June 2018, but has never received adequate resources to be effective.

The EPON research team conducted 66 interviews with MINUSMA and other international officials, Malian officials, civil society representatives, and researchers; organised focus group meetings with civil society in Bamako, Gao and Mopti; and conducted literature and document research. The team found that MINUSMA is facing much criticism. Interviewees and focus group meeting participants feel the Mission is no longer able to improve peace and stability in Mali, and they readily described MINUSMA’s shortcomings. At the same time, there is consensus that, in the absence of MINUSMA, the security situation in Mali, and perhaps even the whole region, would likely deteriorate significantly.

Currently, MINUSMA finds itself at a crossroads. It needs time to succeed, but this is also valuable time Mali does not have at this moment. In the meantime, civilians suffer from attacks, while the US particularly is losing interest in supporting a costly UN peace operation that is not able to deliver quick results. MINUSMA might regain momentum for the stabilisation of Mali, and the broader Sahel region, if strategic choices are made on a number of policy dilemmas. On the other hand, if the UN Security Council makes budget-driven choices, and continues to desire more without adequate resourcing, the results may be disastrous. Some of the main strategic policy dilemmas the Mission faces are described below.

To decentralise the Mission, or not? Although originally large parts of MINUSMA’s civilian component were meant to be deployed in the field, logistical and security reasons have prevented this from happening. Currently, large parts of the civilian component are concentrated in Bamako. This has as an advantage easier communication with the central government, and it facilitates the institution-building side of the mandate. At the same time, one of the main problems is that the majority of the Malian population does not see the major benefits of MINUSMA operations.

To concentrate on the North, the Centre, or both? Originally, MINUSMA was set up to deal with the conflict in the North. MINUSMA’s 2019 mandate renewal has focused more attention on the Centre and particularly on the PoC, while the Mission’s tasks for the North remained the same. With roughly the same resources, attention paid to the central regions may be at the cost of gains made in the North. This raises the question as to whether the Security Council has not made MINUSMA’s mandate more unrealistic.

To link with the government, or not? MINUSMA’s current strategic aim is to restore and extend state authority throughout Mali’s national territory. This task, like MINUSMA’s supportive role for the Joint Force of the Group of Five for the Sahel (JF-G5S), is at times at odds with the Mission’s tasks within the context of the implementation of the Algiers Agreement. In the central and northern regions, the challenge is that support for the national government and its security sector is required to overcome one structural cause of instability in Mali – state weakness. However, in the absence of sufficient human rights due diligence, legitimacy and inclusivity, it may further contribute to another cause of instability – insufficient inclusiveness and good governance.

To support counter-terrorism and stabilisation, or go back to basics? Current counter-terrorism efforts conducted in Mali are highly problematic as they have further fuelled local conflicts. The limited support for the government, its poor human rights and governance record, and its reported use of ethnic proxy militias who are responsible for committing atrocities against the civilian population make it an awkward partner for MINUSMA. At the same time, returning to political tasks alone may risk further destabilisation of the country and potentially the whole Sahel-West African region.

With MINUSMA’s 2019 mandate renewal, the Security Council has in essence decided the Mission has to struggle on with the current resources, whilst having to focus on Centre in addition to the North. This might not further destabilise the situation in the North directly, but it may not be enough to help stabilise the Centre. Most likely, it will continue Mali’s slow process of destabilisation, but prevent the immediate collapse or break-up of the country. However, at a later stage the Council will be confronted again with the question: how to move forward. That time its decisions may have to be more drastic. The following strategic policy options are conceivable:

1. Drawdown and possible continuation as a political mission

Drawing down the military force and concentrating on the civilian component appears to be the most cost-effective solution in the short run. However, the risk and serious consequences of the North breaking away, or of a collapse of the Malian state affecting the broader region, should be enough to drop this option. In the absence of its military presence, MINUSMA is probably less able to continue its military and civilian confidence-building role, particularly in the North, and with regard to the peace process. Moreover, a military drawdown would signal a lack of interest from the international community in the developments in Mali, would give momentum to those forces that want to continue the conflict, and would undo the current peace dividend.

2. Readjustment to a counter-terrorism mission

Although this is a less likely and equally problematic option, it is clearly the preferred option of the Malian government, many Malian stakeholders, particularly in Bamako, and key regional players. Currently, MINUSMA is only meant to provide logistical support to the JF-G5S, but the military counter-terrorism efforts of JF-G5S on the Malian side of the border could be integrated into MINUSMA. Since MINUSMA as a whole is unlikely to receive such a counter-terrorism mandate, the JF-G5S could be deployed as a Force Intervention Brigade (FIB) comparable to that of MONUSCO, as was originally foreseen by the Economic Community of West African States (ECOWAS). Alternatively, a model could be envisioned, like the AU Mission in Somalia (AMISOM) and the UN Mission in Somalia (UNSOM), in which MINUSMA is replaced with a regional counter-terrorism force that is supported by UN logistics. The benefits of both models are that the military counter-terrorism strategy would be better integrated into the international approach for the region and it would be better resourced, more accountable in terms of human rights obligations, and more legitimate as it would be part of the UN system, among other benefits. Two major disadvantages are that the JFG5S in Mali is essentially the FAMA, which is not yet reconstituted, and Mali’s problem is mainly a breakdown of its social contract, which cannot be solved militarily.

3. Continuation as a peacekeeping and stabilisation operation, but better resourced

While the need for a large scale presence of MINUSMA in the North may not seem evident at the moment, the importance of continuing political and military support to the peace process in the North should not be underestimated. In the absence of the Mission’s confidence-building presence, the stability of the whole region might be at further risk and, depending on the level of success in the central regions, the North might eventually break away again. At the same time there is a serious need for the protection of civilians in the central regions, which requires additional resources. Enhancing MINUSMA’s outreach and representation might prevent the central regions from collapsing. However, solutions need to be found to ensure stability in the long term. Expanding the Mission further in the central regions without affecting the deployment in the North and, therefore, not risking the stability of that region, would require the Mission to have additional resources. This would clearly be the best option for Mali. However, in addition to the higher costs, which would be a challenge for the UN under the current budget constraints, this would also allow certain parties to dodge their responsibilities further, as the UN would be taking care of them.

Whatever strategic policy option will be picked, security and stability in Mali requires the reparation of the social contract in Mali, which is much more fundamental than a peace operation and even the UN system can achieve. In the end any contribution MINUSMA can make will depend on the willingness of the Malians to strive for an effective and inclusive government. At the same time, supporting such a long term process cannot be done on the cheap. Missions like MINUSMA cannot continue to be requested to do more with the same or even less.