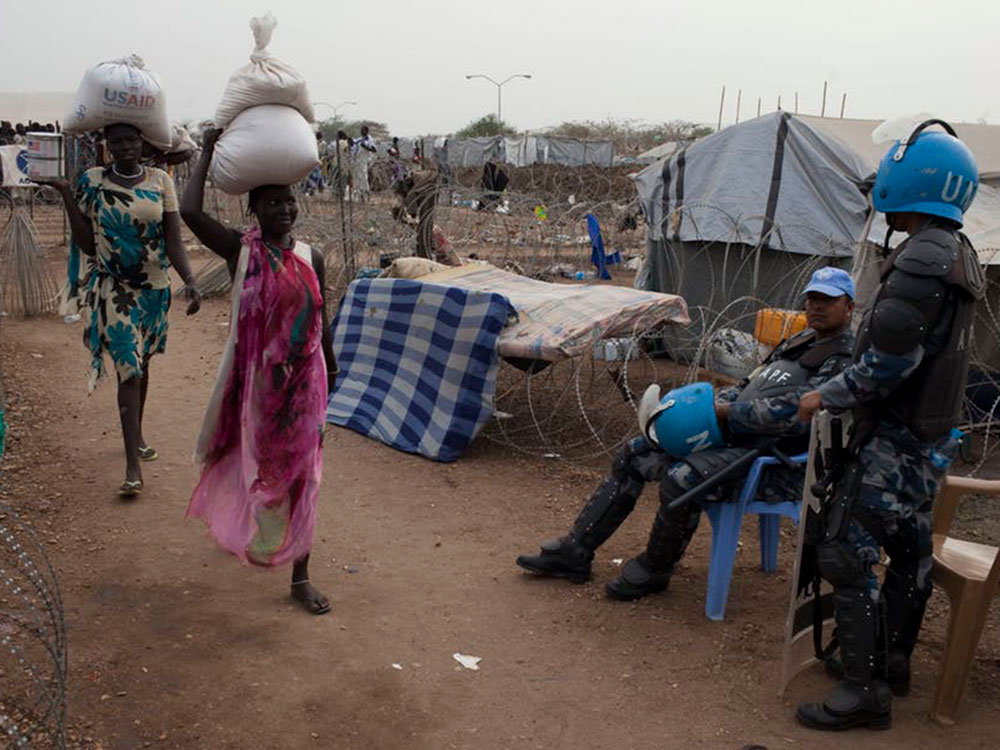 Dilemmas of peacekeeping: what we learnt from talking to people in South Sudan

With the recent overthrow of former Sudanese president Omar al-Bashir, Khartoum’s ability to continue to guarantee the peace process in neighbouring South Sudan may be in question.

Already facing a fragile peace deal, the potential for a relapse into violence could place more responsibility on the United Nations peacekeeping mission that has operated in South Sudan since it became an independent republic in 2011.

Today, nearly 200,000 civilians are still being protected in these UN sites.

Our research in December 2018, in which we interviewed more than 200 South Sudanese in some of the most conflict-ridden parts of the country, assessed the effectiveness of the UN’s peacekeeping efforts in South Sudan.

Some of the local people we spoke to told us that the mission had “prevented a genocide”. By deploying peacekeepers to provide safe passage in areas affected by the conflict, it had also facilitated lifesaving humanitarian aid to more than 100,000 people in the most vulnerable communities.

Our findings support other research which has shown that peacekeeping can be effective, protects civilians, and can reduce conflict over time.

But peacekeeping missions have their limitations, some of which we encountered during the course of our research. We found that in many parts of the country freedom of movement had been restricted by warring factions. In addition, the sheer size of South Sudan means that many of the most vulnerable people simply won’t be reached.

The peacekeeping mission may be protecting 200,000 people in its sites, but there are more than two million displaced by the conflict across the country, and hundreds of thousands more vulnerable people. With fewer than 17,000 soldiers and police deployed, the mission is only able to protect a tiny percentage of the people who are at risk.

According to many within the UN, and as we have noted elsewhere, using the bulk of its resources to protect people in static sites might not be the best use of them. There is a strong push – not only in South Sudan but across peacekeeping – to become more mobile and deploy peacekeepers more quickly and across more territory. This raises an important question: could the peacekeeping mission protect more people if it shifted its resources from protection sites to larger areas across South Sudan?

Unfortunately, we were unable to answer this question – the UN doesn’t collect or analyse patrolling data in a systematic way. We did, however, find that where the mission had established a permanent presence on the ground and patrolled regularly in communities, residents reported a strong improvement in their security. This makes sense: where people see UN peacekeepers daily, around the markets and the main roads, they will tend to feel safer (there are, of course, serious exceptions).

However, where UN patrols roll by in armoured vehicles without stopping to talk to locals their impact is much harder to measure. Our research points towards the need to better understand the quality of patrols, and to ask what impact they might be having on people’s lives.

When we interviewed displaced people within the sites there was a sense that the security situation was improving. Many of them left the UN-protected sites daily to trade and visit family in nearby towns. They returned to the camps at night.

But many displaced people have opted not to return to their former homes for now, instead asking the UN to relocate them to areas where they feel safer. These tend to be opposition-controlled areas outside major urban zones.

Uncertainty drives many of their decisions. Uncertainty over the peace process, which could lapse at any time, and a lack of clarity about where the safest, most prosperous place will be for them and their families. There are huge displaced populations across the country, and people will likely continue to move several more times before they settle. One youth we interviewed named four different places when we asked where he thought he would be next year.

In the immediate term, displaced people seem to be following UN services, choosing to move wherever its agencies and funds are providing health care, food and education. While this is logical, it also places a real burden on the UN to decide where such services should be placed. Urban areas tend to be where most economic and educational opportunities have developed in South Sudan, but they are also sites where many people see government security forces as a risk.

It’s tempting to fall back on the UN’s mantra of local ownership and merely say “let the South Sudanese decide where to go”. Of course, it is their decision. But in a country as deeply divided as South Sudan, where millions of people rely exclusively on the UN for their daily survival, the UN cannot avoid being a factor in what happens next.

Road ahead for South Sudan

South Sudan has reached a generational crossroads. The older men who lead the country have lived their entire lives in a state of war and often seem incapable of building peace. The hope for the country is in its young people.

When we interviewed young people, they overwhelmingly spoke of the roads connecting cities as their most important tool for peace. They saw towns as places where they had better opportunity, and roads as the way for South Sudan to overcome its deep divisions. Unfortunately, South Sudan has some of the poorest infrastructure in the world, with a rainy season that leaves some communities cut off for months. One glaring result of the civil war is that communities are more divided than ever.

Our research does more to expose the dilemmas than resolve them. There are no easy answers, but the youth we interviewed offered an insight into the lives of the South Sudanese. They see their best opportunities and greatest long-term protections in their own mobility through a road system that better connects communities.

Looking to the future, perhaps focusing more on the mobility of the South Sudanese than on the peacekeepers should guide the UN on the long road ahead to durable peace in South Sudan.