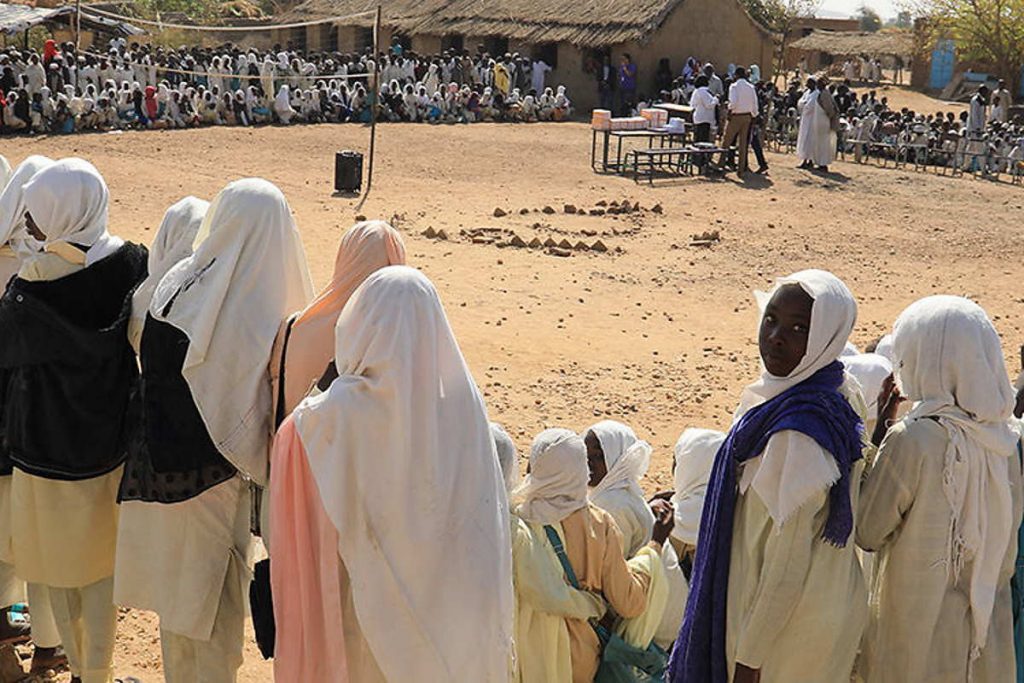 Protecting civilians after UNAMID: Options for a follow-on mission in Sudan

While the closure of the African Union-United Nations hybrid operation in Darfur is set for late this year, the size and scale of the follow-on mission for Sudan requested by the new Prime Minister Abdalla Hamdok has been the topic of significant debate. Questions of whether or how much any new UN special political mission in Sudan should be involved with tasks associated with “protection of civilians” has been a particularly controversial point. As highlighted recently in the Global Observatory, there appear to be differing views within the Secretariat and the Security Council over the need, wisdom, and practicality of providing the new mission with protection-related tasks.

What are the options for civilian protection, broadly conceived, in Sudan? The ones laid out in this article fundamentally align with letters from Prime Minister Hamdok and the AU-UN report on proposals for the follow-on mission, and are based, in part, on my visit to Sudan and Darfur in January 2020 with the Effectiveness of Peace Operations Network (EPON), a consortium of independent think tanks and academic institutions (including the International Peace Institute), which involved meetings with government, communities, and UN personnel on the ground.

However, this piece underlines two elements that may not be fully clear from the letters and report referenced above. First, the protection of civilians remains a significant concern in Sudan that should be included in the mandate of the follow-on mission. Second, the government should lead in executing that mandate, but the mission will have to play an important role in advising and supporting the government and, when necessary, holding it to account.

Is there a need for protection?

Peace operations should be based on an assessment of needs, and the threshold question is thus whether the situation in Sudan presents potential threats to civilians that rise to a level of international concern. The answer to this question is that such threats clearly do exist.

The Council began UNAMID’s withdrawal in 2017, based fundamentally on two premises. First, former president Omar al-Bashir was so deeply invested in obstructing UNAMID that the cost of real progress in implementing the mandate – particularly with regard to protecting civilians –would be too high for member states to bear. Second, after fifteen years of fighting, the al-Bashir government had secured a nominal military victory over the rebels, and the original armed conflict in which UNAMID had been sent to protect civilians was reduced to sporadic banditry and a handful of rebels in remote mountain areas.

Both of these assumptions no longer hold. The new transitional government is far more open to a UN mission, as evidenced by Prime Minister Hamdok’s letters to the UN Secretary-General, and the apparent stability created by al-Bashir’s military victory is less certain now that the strongman has fallen. The context in Sudan has changed, of course, and UNAMID is likely no longer the appropriate tool for Darfur and certainly not for the country as whole. Yet, with many protection concerns still very real, UNAMID’s withdrawal calls for a reconception of its core mandate rather than an elimination of it.

The fall of al-Bashir will hopefully lead to more peaceful and democratic Sudan. But before these hopes are realized, the country will need to navigate a treacherous and uncertain path. Al-Bashir was a master of maintaining power, but he almost never successfully resolved any of the countries many deeply-held grievances. Darfur is a clear case of this tendency; despite numerous rounds of mediation and the potential for a power-sharing authority, the al-Bashir government chose a military solution. This drove most rebel groups out of Sudan in 2014, yet did nothing to resolve the root causes of political and economic marginalization that sparked the 2003 conflict.

The absence of Sudan’s longtime “strongman” also raises questions about short-term security and stability. For all of al-Bashir’s faults, he nimbly maintained control over the country’s various security forces; now his absence throws that control into question. In January, shortly before the EPON team’s visit, violence broke out in El Geneina in western Darfur. At least 70 people were killed in fighting that reflected many of the ethnic and political divisions of the Darfur conflict from 2003 (western Darfur was an initial hotspot in that conflict, and the area around El Geneina saw widespread fighting in 1998, 1999, and 2000 in the lead up to the full-scale war). In March, Prime Minister Hamdok survived a brazen assassination attempt. Incidents like these indicate that, in the absence of al-Bashir’s iron-clad authority, factions in the country may turn to violence to settle disputes in an uncertain period.

Thus far the new government – which is overseen by a joint military-civilian transitional council – has laudably avoided any significant security schisms. But the prominent role of General Hamdan “Hemedti” Dagolo, whose Rapid Support Forces are composed primarily of former “Janjaweed” forces that wrought such havoc in Darfur over the past two decades, has led many observers to worry about future of the Sudanese state.

These three essential points could help the follow-on mission in Sudan provide a context-specific framing for protection that addresses the country’s needs within the overall political context: a focus on field-based dialogue and monitoring rather than a militarized approach; strong government ownership of protection activities with the mission supporting and advising and, when necessary, ensuring that protection standards are being met; and recognizing that the follow-on mission will have a unique role to play in re-building trust between the government and communities in many areas, a role that may argue in favor of operational presence in some areas.

1. Protecting civilians does not require a militarized mission

The debate over protecting civilians in Sudan is weighed down by the historical baggage of UNAMID, which has largely been criticized for its poor performance despite a heavy focus on protection; the mission gained a reputation for failing to act to protect, yet its core protection mandate seemed to place it directly at odds with the al-Bashir government.

However, UNAMID’s highly militarized concept of protection is not the only model, and finding the appropriate frame for protection at the current moment is essential. Where international action is involved in support of protection, the Department of Peace Operations and the Office for the Coordination of Humanitarian Affairs have always been clear that the primary response is one of dialogue. The phrase “protection of civilians” should not conjure images of soldiers and helicopters, nor should it be implicitly or explicitly linked to the use of force. While uniformed peacekeepers have played an important role in many current and past UN missions, this is a contingent rather than a necessary element of the protection mandate. The recently revised UN policy on protection of civilians emphasizes the role of political dialogue, engagement, and more generally civilian-led activities that support the establishment of a protective environment.

While it is vital to counter the general perception that protecting civilians requires the use of force, armed police or military personnel are an option at the UN’s disposal and should be considered if necessary. Armed former police units, for instance, could support public order in internally displaced person (IDP) camps in a less confrontational manner than government forces. Similarly, unarmed military observers in the Jebel Marra may benefit from UN guard units, as utilized in the Special Political Missions in Somalia, Libya, and Iraq.

Proponents of larger military presences often question whether a protection mandate in the absence of a substantial military commitment raises unachievable expectations. Managing expectations is a key challenge of the protection mandate, but it begins with recognizing the intelligence and sophistication of the local population. In this case, the Sudanese (and particularly the Darfuri) people have extensive experience with UN missions and understand their capacities and limitations. Fundamentally, any UN presence, whether armed peacekeepers or unarmed humanitarians, will raise expectations regarding protection. Effectively communicating how the UN will support the population and then delivering on those promises, however limited, is the most effective way to build credibility.

2. Government lead, but transparent reporting from the mission

A reframed protection concept should recognize the importance of the Sudanese government while also establishing standards to which the government should aspire to and, if necessary. International law, as well as UN policy, make clear that national governments have the primary responsibility for protecting their people, and the situation in Sudan reinforces the importance of supporting the nascent government. In this respect, the AU-UN report’s recommendation for advisers to the government (whether civilian, military, or police) as a main tool for protection is a sound one.

At the same time, the experience of UNAMID holds two crucial lessons for the follow-on mission. First, deficits in protection in Sudan rarely arise from technical errors but rather from civilians. From this perspective, the role of government advisers on protection will need to be nuanced and highly political. Second, and more importantly, UNAMID’s history is also sullied by examples of self-censorship of its reports to cast al-Bashir’s regime in a better light and ease the operational blockages that the government’s ill-will created. A follow-on mission will hopefully have no negative news to report, but when such news arises, it must be able to transmit such information freely, objectively, and effectively; it cannot fall in to the same trap. To do so, the mission should also maintain an independent and transparent reporting mechanism to the Security Council.

3. Filling the trust deficit through independence and impartiality

Many of Sudan’s protection gaps, particularly those in Darfur, arise from a deterioration of trust between the government and communities. Helping to fill this gap is a key role that the mission can play. It is a role of prevention and conflict mitigation that does not require a Chapter VII mandate but does require the mission to support protection efforts independently and impartially. Through monitoring, reporting, advising and mediating, the mission can significantly contribute to protection in Sudan. It can also, given the right circumstances (including government consent), include the deployment of uniformed personnel in places such as IDP camps in Darfur, where government police have historically had difficulty operating.

The following options for civilian protection in Sudan are not mutually exclusive – indeed, a single element is almost certainly insufficient, and more modalities will only strengthen the mission – and they are all built around the principles laid out above.

Centrally, the mission must balance supporting the government to protect its people while also holding it to account for failures. Of additional importance is ensuring that all members of the mission recognize that the efforts to protect civilians should be a priority and a shared responsibility that is not relegated to a specialist unit, but in which all mission staff are invested.

Ralph Mamiya is a Non-resident Adviser with IPI, the Team Leader of the EPON Darfur study, and is the former team leader of the Protection of Civilians Team in the United Nations Department Peacekeeping Operations and Department of Field Support.