Assessing the Effectiveness of the African Union Mission in Somalia (AMISOM)

This report assesses the extent to which the African Union Mission in Somalia (AMISOM) has achieved its current strategic objectives and what impact, if any, the mission has had on broader political and security dynamics in Somalia. 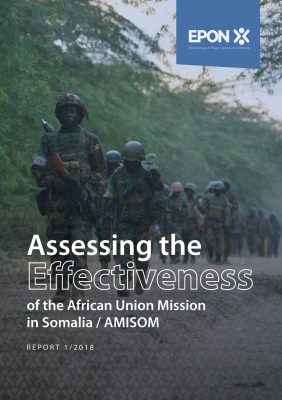 Now in its eleventh year of operations, AMISOM is part of a wider constellation of international actors trying to stabilise the country. This constellation exemplifies the opportunities and challenges of partnerships in contemporary peace operations. It also puts a premium on ensuring effective coordination between these actors, most notably the Somali authorities, the African Union (AU), United Nations (UN), European Union (EU) and some key bilateral partners, including the US and UK. AMISOM is, therefore, in the unenviable position of not being fully in control of its own destiny. Instead, it must rely on and find the right division of labour between these other actors.

This also has consequences for assessing AMISOM’s effectiveness because the mission has not played the leading role in responding to Somalia’s fundamental problem: a political crisis characterised by disagreements over governance structures, a lack of reconciliation, and numerous, often interrelated armed conflicts fought over a variety of issues. Nevertheless, looking back on the situation in Somalia in early 2007, AMISOM has clearly made considerable progress in a very difficult environment. Deployed to Mogadishu when al-Shabaab controlled most of the city and much of south-central Somalia, AMISOM has always been an under-resourced mission. Despite suffering extremely high numbers of casualties, the AU force pushed the militants out of the capital city in August 2011 and expanded its operations.

Over the next few years, al-Shabaab forces were ejected from the major population centres across south-central Somalia. In doing so, the mission played a major role in protecting two transitional governments, two federal governments, and two national electoral processes. AMISOM has therefore succeeded in creating political space for Somalia’s leaders to address their key internal problems related to governance and a lack of reconciliation. The mission also helped create the conditions for numerous international actors to return to Somalia, including the UN. Even some of AMISOM’s harshest critics concede that these positive developments would not have been possible without its efforts.

In this sense, AMISOM has made progress on its three current strategic objectives, namely, reducing the threat posed by al-Shabaab and other armed opposition groups; providing security to enable Somalia’s political process and efforts at reconciliation; and handing over its security responsibilities to the Somali security forces. However, the mission continues to face difficult challenges and limitations which mean that, on its current trajectory, implementing an effective transition to Somali forces will neither be straightforward nor happen quickly.

First and foremost, while AMISOM could do more to degrade al-Shabaab’s forces, it cannot defeat the militants. This cannot be achieved by military means alone but requires Somalia’s federal and regional leaders to reconcile and implement a decisive strategy either to prioritise the defeat of al-Shabaab or to engage in a political dialogue that could produce a settlement to end the war. At present, concerns are evident across some civil society groups and international partners that AMISOM’s momentum and progress in this area has been stalled and that al-Shabaab has regained power and influence over the last few years.

Second, unfortunately, Somali elites have not taken full advantage of the political space that AMISOM has helped facilitate. Long delays in finalising the national constitution and the details of federal governance—both of which remain works-in-progress—have made it impossible to build an effective and genuinely “national” set of Somali security forces and institutions. Although the Somali Federal Government and regional administrations ostensibly agreed on a new national security architecture in April 2017 and a Somali Transition Plan in early 2018, the detailed political and financial arrangements required to make these structures work have not been finalised. As a result, key elements remain unimplemented. The Somali National Army (SNA) and police forces also continue to languish in a dire state, as demonstrated by the two operational readiness assessments that were conducted during 2017. An ongoing operational readiness review of Somalia’s “regional forces” is scheduled to be completed by the end of 2018. AMISOM has therefore been forced to operate without effective local partners that could deliver stabilisation and a peace dividend in the settlements recovered from al-Shabaab. This challenge has recently been exacerbated by the unhelpful policies pursued by several Gulf states which have deepened divisions and increased conflict between the Federal Government and regional administrations across Somalia.

Third, AMISOM remains an under-resourced mission with important gaps in its capabilities. At the strategic level, since 2012, the mission has struggled to be more than the sum of its national parts. This is due to a lack of unified command and control between its force headquarters and the troop-contributing countries (TCCs) that control the mission’s sectors. At the more operational level, two particularly salient gaps are predictable and sustainable financial resources, which have left AMISOM contingents receiving considerably less reimbursement allowances than their counterparts in UN peacekeeping operations, and the failure to generate the mission’s aviation component of twelve military helicopters that were authorised by the UN Security Council in 2012. AMISOM’s three military helicopters were only deployed in December 2016 and have severe operational limitations. Although helicopters would not have defeated al-Shabaab, they would have offered a means to rapidly strike militant forces, provide air cover for friendly troops, escort convoys, enable rapid response to attacks, and potentially even airdrop forces. In light of such limitations and a general reluctance to undertake sustained offensive operations, our assessment is that AMISOM has now effectively culminated militarily, that is, it cannot achieve additional major results in its current configuration.

Taken together, these three challenges highlight that AMISOM alone is unable to resolve Somalia’s fundamental problem: the country’s crisis of governance that has spawned al-Shabaab and other forms of opposition to the government. This can only be solved by Somalis and those external actors who have the leading role in supporting Somalia’s political transition, which falls to the UN Assistance Mission in Somalia (UNSOM) and those states that can exercise most leverage over local leaders. This has left AMISOM suffering from a persistent gap between its activities on the military track and broader political progress among Somalia’s federal and regional leaders.

Going forward, AMISOM needs to reconfigure its presence and operations to support the Somali Transition Plan effectively. This will include a new Concept of Operations document developed in light of the AU’s internal assessment of AMISOM’s capabilities conducted jointly with the UN in August and September 2018. The restructuring of the mission’s force headquarters and the ongoing attempts to develop multinational sectors should also be geared to supporting the overall state-building agenda in Somalia, including the Transition Plan. With the mission’s contributing countries showing signs of fatigue and a reasonable desire to limit further casualties, priority tasks should focus on providing perimeter security at the major population centres (at a minimum, Mogadishu and the regional capitals), securing the main supply routes between these centres, and dealing with al-Shabaab defectors.

In order to conduct effective offensive operations against al-Shabaab, AMISOM forces would need to move away from a static and defensive posture and become more agile, ideally with the ability to outpace the militants’ forces and strike them from depth. But there should also be consistent cooperation and coordination with offensive operations launched by the Somali Danab advanced infantry units, which operate with US support.

In terms of defensive operations, AMISOM should focus on its two main vulnerabilities: major al-Shabaab attacks on some of its forward operating bases (FOBs) and convoys, and the more frequent challenge of countering improvised explosive devices (IEDs), which account for the majority of recent casualties. This would almost certainly mean reducing the number of AMISOM FOBs. Here, relations between AMISOM and the Somali security forces and the UN Support Office for Somalia (UNSOS) are particularly crucial. If AMISOM is tasked with playing a greater role in the stabilisation of settlements recently recovered from al-Shabaab beyond the regional capitals or priority areas for the Somali Transition Plan, then its civilian component should be enhanced in order to exploit the mission’s potential comparative advantage of deploying civilians in areas where UN personnel could not be deployed.

Whatever set of priorities is adopted by the AU and UN, it is crucial that AMISOM, the Somali authorities, and the mission’s international partners work in close, coordinated partnership. To that end, the division of labour outlined in the five strands of the Comprehensive Approach to Security (CAS) is sensible. But their effective implementation will require firm and sustained political leadership as well as sufficient resources from the Somali authorities, the AU, UN, and the mission’s international partners. If these are not forthcoming, some of AMISOM’s gains over the last decade could be reversed.

The ePub version can be downloaded and read on a computer, tablet or phone with an e-reader application.