Evaluation of the relevance, effectiveness, and efficiency of African Union – United Nations Hybrid Mission in Darfur (UNAMID) in supporting transition from peacekeeping to peacebuilding in Darfur in collaboration with United Nations Country Team (UNCT) 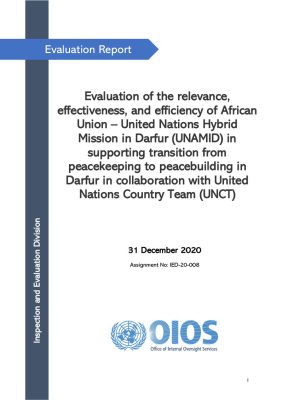 OIOS-IED conducted an evaluation of the relevance, effectiveness and efficiency of the African Union-United Nations Hybrid Operation in Darfur (UNAMID) in supporting transition from peacekeeping to peacebuilding in Darfur in collaboration with the United Nations Country Team (UNCT) in real-time from February 2019 to February 2020. This utilized a combination of semi- structured interviews, document review, electronic survey, direct observations, and case study in two phases.

The OIOS team engaged with all relevant stakeholders which included United Nations Headquarters, UNAMID, UNCT, the African Union, the Government of Sudan, local communities, and civil society organizations. An Advisory Memorandum was issued to transition managers in October 2019 after phase one of the evaluation, as a result of real-time evaluation, to aid timely recalibration and strengthening of transition planning, coordination, integration, and implementation. Although transition was repeatedly disrupted due to political upheavals, social disharmony, and security incidents, as well as the COVID-19 pandemic, UNAMID was able to steer the mandated activities efficiently within the constraints.

The results of the second phase of the evaluation indicate that UNAMID has made significant progress in transition implementation, drawdown, and preparation for exit, with its activities relevant and aligned with the mandate and directives. The political transition in Sudan presented both disruptions and opportunities for transition in Darfur. In the aftermath of the change in Government in Sudan, the strategic needs and priorities of key stakeholders which were initially divergent, converged around UNAMID exit, follow-on presence, and peacebuilding needs. However, limited availability of consolidated lessons learned and best practices from previous transitions impacted application at the operational and functional levels.

Several challenges emerged. UNAMID and UNCT struggled to streamline planning, coordination, and integration due to various factors. First, transition leadership appeared fragmented in a non- integrated, geographically dispersed decision-making setting compounded by shifting institutional priorities, lack of clarity in roles and responsibilities and limited ownership of transition objectives. Second, the joint planning and coordination mechanisms for the transition were not sufficiently effective due to late engagement with GoS, inadequate working-level linkages at the operational level, and the lack of formal structured coordination in the field. Lastly, the State Liaison Functions, envisaged as a joint UNAMID-UNCT vehicle for transition, progressed and generally met the stated objectives in the SLF concept.

To advance transition objectives, UNAMID secured African Union (AU) engagement and support at the strategic level but recognised the need for AU to play a larger role at the operational level. Similarly, in the aftermath of the political transition in Sudan, UNAMID also secured increased national engagement, commitment, and ownership for effective transition in Darfur, despite the limited capacity of GoS and the continued prevalence of political and security instability.

For the longer-term, UNAMID and UNCT endeavoured to address conflict drivers, but significant risk of relapse into conflict remained. This existed due to the unaddressed root causes of conflict, protracted humanitarian and protection needs, the destabilizing activities of paramilitary forces and armed groups, prevalence of a high number of illicit weapons among communities, and an unfinished peace process. While UNAMID identified and endeavoured to address reputational risks, the internal asset management, misutilization and misappropriation of team sites and assets handed over to GoS entities, the vulnerability of remaining team sites to looting and criminal activities, the potential negative environmental fallout, and the risks related to serious misconduct including SEA remained major concerns.

Some key factors contributed to, or constrained, the effectiveness and efficiency of transition in Darfur. The peacebuilding aspect of the transition was inordinately delayed due to political uncertainties, prevalent security situation, lack of donor support, and internal eligibility processing issues. In addition, persisting systemic issues associated with leadership, integration, institutional silos, and others affected the transition planning and implementation. The acute human resources drawdown and the low morale of staff impacted transition planning, preparation, and implementation significantly. While the backstopping support provided by the United Nations Headquarters in terms of guidance, engagement, and surge support was found adequate, the support provided from United Nations Development Coordination Office to Resident Coordinator Office was found insufficient.

Thirteen (one critical and twelve important) recommendations were made to improve the efficiency and effectiveness of the transition in Darfur.