UN/AU Transition in Darfur: Lessons from Assistance on Rule of Law and Human Rights through the State Liaison Functions 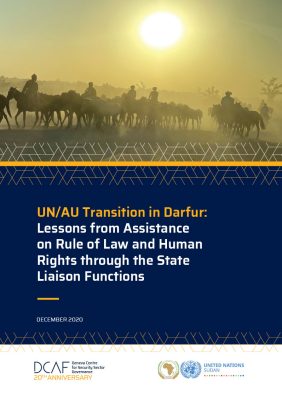 The improvement of planning and management of UN Peace Operations is key to the current reform of the Peace and Security pillar of the UN System, including the crucial phase of Mission transition, when commitment to resilience and sustainability of the initiatives supported during the lifetime of the Missions should be bolstered. It is also at this juncture that the interface with the reforms of the Development pillar of the UN System, aiming at increased effectiveness for delivery on the Sustainable Development Goals (SDGs) becomes more prominent.

To deepen understanding about how these interfaces impact the delivery of substantive agendas and in order to improve these processes, the UN has been accumulating lessons from different transition contexts. The present lesson identification project carried out at the request of the African Union – United Nations Hybrid Operation in Darfur (UNAMID) by a joint DCAF-UN team contributes to this broader endeavor, by offering a practitioners’ understanding of the process currently ongoing in Darfur.

The lessons were therefore captured firsthand, including identification of good practice deriving from implementation of the new whole-of-system transition concept by the AU/UN system to advance peacebuilding in Darfur through the “State Liaison Functions” (SLFs). Whilst this project was ongoing, Sudan’s rapidly evolving political transition prompted the establishment of the United Nations Integrated Transition Assistance Mission in Sudan (UNITAMS). Therefore, in addition to contributing to timely learning for upcoming transition processes (for example DRC, Mali, CAR), the opportunity was also seized to develop recommendations to inform ongoing thinking by the UNITAMS planning team.

Introduced in 2018 as a new mandate implementation modality of UNAMID, the SLFs as a tool aimed to bridge the transition from peacekeeping to peacebuilding and to contribute to preventing relapse into armed conflict in Darfur. This was designed around delivery in four strategic transition priorities, namely rule of law, human rights, durable solutions and service delivery for internal displaced persons (IDPs) across four Darfur states (North, South, West and East). Enabled by financing from the Mission’s assessed programmatic funding and supported through co-location of UNAMID’s personnel with the United Nations Country Team (UNCT), the operationalization of the SLFs was premised on joint analysis, planning and delivery by UNAMID and UNCT in cooperation with national actors.

The SLFs have grown to become widely considered by nationals and internationals alike as a useful initiative to galvanize the transition, despite ownership related challenges at the inception stage, which were overcome during implementation. Implementation varied between the different pillars, but overall for Rule of Law (RoL) and Human Rights (HR), which were the focus of this lesson identification, it was an important tool to consolidate prior investments in these areas. The SLFs also enhanced system-wide synergies and built capacities for UNCT (especially the most under-resourced agencies) and national actors (state authorities and civil society) to sustain their Rule of Law and Human Rights work beyond the closure of UNAMID.

There was widespread acknowledgment that compared to other pillars RoL and HR were able to better capitalize on the SLFs given the accumulated experience from joint Mission/UNCT programming and proactive engagement in transition planning since 2016. Existing assessments, planning, partnership dialogue and coordination between UNAMID and UNCT stemming from the development of the Joint Programme for RoL and Human Rights (2016-2019) were critical, notwithstanding limited results during implementation, mainly due to significant funding gaps.

Funding-wise the SLFs represent the largest ever allocation of programmatic funding from the assessed peacekeeping budget for investment in peacebuilding (circa USD 45 million for SLFs I-V), in a comprehensive context of Mission transition and joint work with the UNCT. This enabled the outset of a development-oriented perspective in a recovery context to bridge the prevailing logic of humanitarian assistance in Darfur.

Sequenced in time and thematic effort by a Peacebuilding Fund allocation against a continuum from peacekeeping to peacebuilding (circa USD 20 million over 24 months), the UN Secretariat provided a concerted and sequenced effort towards sustaining peacekeeping gains in Darfur, notwithstanding the significant outstanding funding needs.

The SLFs contributed to addressing critical conflict drivers, through comprehensive programming and support to the various elements of the criminal justice system. Areas deserving special mention include strengthening relationships and confidence amongst these institutions, between them and civil society groups, and with communities. This was done, amongst others, through fostering coordination and promoting gender and child responsive service delivery, including the adoption of violence prevention approaches.
With regards to human rights, appreciation by national interlocutors for the support enabling the physical presence and operations of a National Human Rights Commission branch in North Darfur rated highly. Overall national interlocutors valued the SLFs contributions to sustaining stability and peacekeeping gains through building rule of law and human rights capacities and strengthening community engagement in these areas whilst building awareness of their rights. SLFs programming has also been a catalyst for social cohesion, development and transforming lives; especially with the supported interventions that have brought services closer to communities.

As a tool, the SLFs demonstrated flexibility and adaptability within an ever evolving political, security and operational landscape. Key examples include:

shifting the central focus from a core institutional to a prevailing community-based engagement approach during and after the revolution; and

adjusting to contribute financially and programmatically towards a One-UN response in support of the Government plan to address the COVID-19 emergency.

The process of operationalizing the SLFs was not without challenges, and views congregated around several points. The absence of endogenous ownership by UNAMID/UNCT at the concept design phase which was driven by the United Nations Headquarters (UNHQ). The influence stemming from the perception that the SLFs were introduced in response to dynamics of political expediency and financial concerns at the UNSC around transition, rather than to address Darfur’s specific needs. The compartmentalization of transition planning leading for example, to initial lack of synergy between the programmatic and the political strands of work.

Other key challenges derived from the lack of a joint Mission/UNCT programmatic-oriented and comprehensive assessment following UNSC Resolution 2429 (2018), and corresponding analysis to inform the operationalisation of the SLFs architecture and implementation stages. Furthermore, the situation was complicated by the introduction of the SLFs at a time of change in leadership (both at the Mission and Resident Coordinator (RC) with the vacuum period characterised by coexistence of varying degrees of understanding of the concept at the beginning. An additional set of issues concerned: the lack of clarity around the process and criteria for composition of partnerships and selection of projects eligible for funding; a lack of guidance and of a functioning coordination mechanism from the start; staffing and financial inter-operability difficulties; top-down Khartoum program design (UNCT), and the unrealistic short timelines for SLFs project implementation associated with curtailed financing cycles.

These observations offer relevant learning for the UN system when designing upcoming Mission transitions along with accompanying mitigation measures. Indeed, several of these shortcomings have been mitigated, and processes improved over time driven by joint Mission/UNCT leadership, growing staff commitment, and enabling problem-solving support provided by UNHQ. In this regard the Justice and Corrections Standing Capacity (JCSC), the Global Focal Point (GFP), and the DPO/DPPA/DOS/UNDP-Transitions Project provided meaningful support, in addition to the posting of a transition officer and an SLFs focal point in the RC office team. Additional measures included a planning exercise drawing on existing information and experience accumulated since 2016 on rule of law transition planning, including amongst others a joint UNAMID/UNCT study on the criminal justice chain in North and West Darfur, carried out in 20179.

The limits of the SLFs modality introduced by the UNSC faced a litmus test regarding a key mandate area: the Protection of Civilians (PoC). Both UNAMID Human Rights’ monitoring engagement and early warning capacities were significantly diminished, without putting in place an adequate joint UNCT- Mission equivalent mechanism in “peacebuilding areas”.

This was partially mitigated by the creation of a Mobile Monitoring Team (MMT) within UNAMID’s Human Rights Service. Despite being a creative woraround, the MMT was insufficiently resourced to deliver on its task, with only four people covering the four Darfur states’ hotspots on a roving basis.
Whilst the positive results of promotion and awareness-raising of human rights were generally acknowledged by Darfurian interlocutors, vulnerable groups – including IDP communities and women groups – stressed that they moved from a position of vulnerability to one of threat (including physical), through the removal of Mission uniformed and civilian capacities in deterrence and early warning in the designated peacebuilding areas. Protection concerns prevailed throughout the duration of this study, with major cities in Darfur experiencing civil unrest which caused loss of life and property, with women and children being significantly affected10.

On balance, the SLFs were a useful mechanism, around which UN system coordination in certain thematic areas and flexibility on inter-operability issues was achieved. This was especially notable considering that prior to its introduction there was no integration between the hybrid UN-AU peacekeeping mission in one region of the country and the UN AFPs national programming.