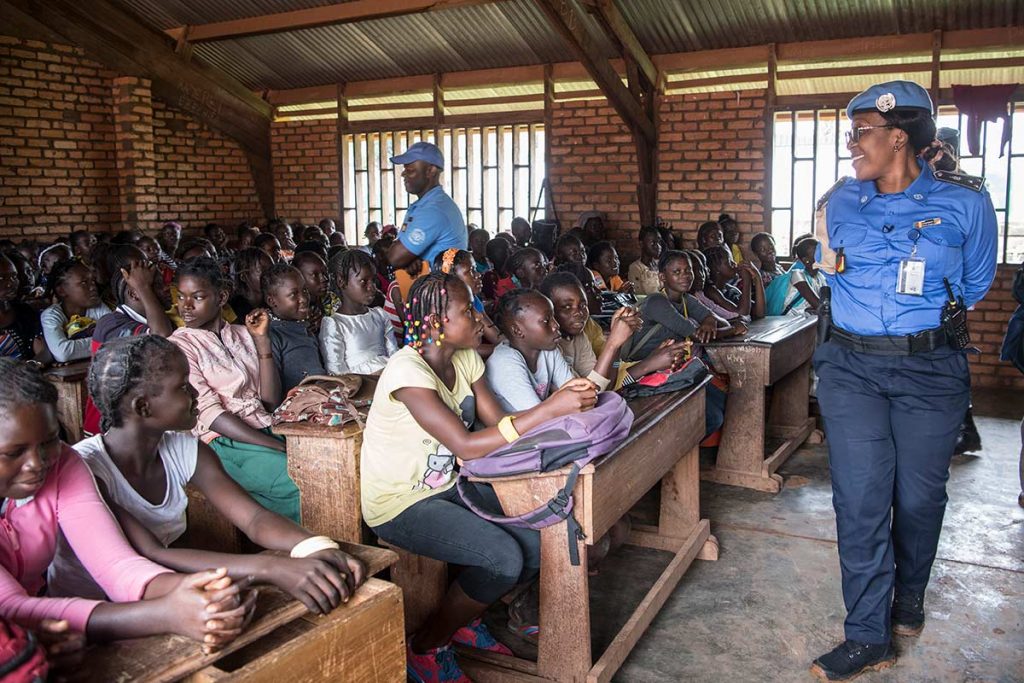 The United Nations Multidimensional Integrated Stabilization Mission in the Central African Republic (MINUSCA) is a puzzling mission. MINUSCA had starkly positive effects for its first two years of operation, but violence against civilians resumed in late 2016, and rebel groups have come to control some 80 percent of the territory. The February 2019 peace accord between the government and 14 armed groups provides reason for hope, but several conditions – having little to do with MINUSCA itself – may prevent progress, notably, the absence of clear consequences for leaders and groups who defect from the peace, illicit trafficking, and emerging P-5 rivalry.

This blog piece encapsulates some of the findings of the forthcoming 2020 Effectiveness in Peace Operations (EPON) report on MINUSCA. In July-August 2019, the research team, including Lise Howard (lead author), Aditi Gorur, Yvan Ilunga, Nina Steinitz and Gino Vlavonu, visited offices of the United Nations, African Union, European Union, foreign embassies, CAR government, NGOs, and a variety of others mainly in Bangui, but also in Bambari, Birao, Bria, Kaga Bandoro, Paoa, and New York. The team conducted nearly 200 interviews with people in and around the UN system, and held five focus groups with Central African citizens.

Effectiveness in Peace Operations Network studies contain three basic parts: (1) a context analysis, (2) an identification of mission effects, and (3) an assessment of the six EPON explanatory factors: mandates and resources, political primacy, people-centered approaches, legitimacy and credibility, coordination and coherence, and women, peace and security. This brief summary proceeds in line with this three-part structure.

The youngest of UN’s current “big five” peace operations, MINUSCA deployed in September 2014 with great promise. The Central Africa Republic (CAR) had only been at war from 2012-14, and the violence was viewed as opportunistic, rather than deeply entrenched or endemic. Legacies of the Arab slave trade and privatized French colonial rule have plagued the central African region since independence in the late 1950s, and most power transitions in the Central African Republic have not been democratic. Neither, however, had Central Africa experienced widespread peaks in violence against civilians. According to our interviews, many perceived the problems in Central Africa to be small-scale, localized grievances, differentiated by region. These grievances stemmed largely from an absence of state governance structures, a culture tolerating vengeance, and a widespread sense of impunity. The seasonal “transhumance” had caused tensions between famers and pastoralists, when mainly Fulani or “Peul” move their cattle (sometimes from Chad, Sudan, or South Sudan), to graze in the lush plains throughout CAR, and then move further to sell their beef in Bangui and other cities, sometimes trampling crops or disturbing harvests. However, government policies for mutually accepted migration routes, alongside local dispute resolution mechanisms, generally sufficed to keep farmer-herder disputes from escalating.

Pastoralists have increasingly become armed, however, as small arms proliferate in the region, often washing down from Libya. Herders and traders are also contributing to the flow of illicit gold and diamonds moving through the neighboring states of Chad, Sudan, South Sudan, DR Congo, and Cameroon. Moreover, the absence of productive economic and educational opportunities (especially for the country’s youth), and deepening communal divisions, have intensified over time.

The Central African Republic ranks the second poorest in the world, and it was the last on the human development index when MINUSCA deployed.1 Roughly the size of France, or the U.S. State of Texas, about 14 percent of its nearly 5 million people enjoy electricity. Potable water is scarce, and most roads are unpaved and difficult to traverse, even when dry.

On the positive side of the ledger, in 2016, MINUSCA assisted with the country’s first free and fair elections. Central Africans elected Dr. Faustin-Archange Touadéra as their president. A former Professor with two doctoral degrees in Math, Touadéra remains the only national politician who eschews the outrage-inspiring “blame game.” He has appointed women to key posts in his cabinet, and he remains publicly committed to resolving disputes through political means, launching most recently, the nation-wide Truth, Justice, Reparation, and Reconciliation Commission. Unlike in some current UN missions, the CAR’s top leader appears to share similar goals with the UN mission.2

MINUSCA deployed on the heels of several other regional and international interventions. In the absence of a functioning national army, gendarmerie, or police, the African Union’s Mission Internationale de Soutien à la Centrafrique sous Conduite Africaine (MISCA) initiated stabilization efforts with 5,000 troops, 600 police and a sizable civilian presence. The mission would eventually re-hat to the UN, providing about one third of the eventual UN force. Separately, in 2013, the strong 3,000 “Sangaris” French Special Forces mission deployed with significant airpower. Unlike the AU or UN missions, Sangaris had a mandate that was very limited in scope. As several interviewees explained, it boiled down to “tu bouges t’es mort.” If you attack civilians, you’re dead. Spoilers faced clear consequences.

For the first two years of MINUSCA, when the mission was co-deployed with Sangaris Special Forces, civilian death rates declined dramatically. Refugees and displaced persons were returning home, and the economy grew. The French forces, however, departed in the midst of a sexual abuse scandal, before the national army, gendarme, or police were re-constituted.3 MINUSCA was then defacto left with a military task for which UN multidimensional peacekeeping is not designed, given that its founding principles are impartiality, consent, and the limited use of force.

Despite many challenges, MINUSCA has undoubtedly helped to protect civilians and extend state authority—two essential tasks of its current mandate. MINUSCA has co-deployed with the newly reconstituted Central African Armed Forces (FACA) outside of Bangui, for the first time since 2013. It has also trained nearly 4,000 national police and 4,000 civil servants; constructed and trained staff for prisons and detention centers; enabled the launch of the new, hybrid, Special Criminal Court; and helped to rehabilitate schools, prefecture buildings, community centers, and health clinics. Nearly every interviewee and focus group member said that without MINUSCA, the country would be much worse-off.

At the same time, however, security remains scarce, in a country where massacres against civilians continue to occur every few months. Because of the lingering insecurity, people have trouble resuming work or school. Out of a population of less than five million, more than half remain in humanitarian need, and nearly half remain food insecure. The displacement rate stands at nearly one quarter of the population.

Why has this peace operation had these varying effects? Two factors in particular – political primacy and female inclusion – have helped the mission to make progress. MINUSCA’s legitimacy, however, suffers from uneven strategic communication and misconduct. Beyond the purview of the mission, emerging P-5 rivalry is a troubling trend, and insufficient incentives to curb spoiling undermine the current peace accords.

First, in terms of Political Primacy, MINUSCA has negotiated many local peace agreements. To provide one illustration, in 2017, in the southeastern town of Pombolo, a MINUSCA Political Affairs Officer helped an ex-Séléka pastoral leader draft a letter to the local anti-Balaka mayor, requesting forgiveness for prior violence. The mayor accepted the letter, and the Political Affairs Officer helped to draft a subsequent exchange of letters between the two sides. The local leaders thereafter formalized their methods of dispute resolution, and since then, the town has experienced few civilian deaths (unlike in nearby Alindao and Bangassou, both known for terrible massacres).

Second, for Women, Peace and Security, MINUSCA has employed proportionally more women than any other current UN peace operation (although the number remains low). As an illustration of the effectiveness of female deployments, in the northern-most town of Birao, near the contentious boarders with Chad and Sudan, MINUSCA deployed a female engagement team within the Zambian battalion. The female team has become known for helping the community in a variety of ways, from sweeping the markets alongside locals in the morning, to providing obstetrical services impartially, including to wives of armed group leaders. The brigade has facilitated a sense of unity of purpose between locals and internationals, enabling MINUSCA to help open 13 municipal buildings in the town.

Third, in terms of the explanatory factor, legitimacy and credibility, a common criticism among most interviewees related to MINUSCA’s communications. MINUSCA does not generally poll well among Central Africans domestically. Internationally, although MINUSCA and others have worked to stem widespread sexual violence, the international news generated from this mission continues to focus on UN peacekeeper abuse from 2015-16.

MINUSCA’s legitimacy and credibility deficit, especially within CAR, stems in part from the fact that armed groups continue to spoil the peace. The consequences for spoiling remain opaque. MINUSCA and the CAR government have provided many positive incentives for leaders of the rebel groups to participate in non-violent politics (putting a premium on the important EPON explanatory factory, Political Primacy). The most recent February 2019 peace accord granted all 14 armed group leaders positions in the government, among other positive incentives. The violence against civilians abated somewhat in early-mid 2019, however, massacres have not ceased. Rebel groups continue to arm and fund themselves through uncurbed illicit networks. More coercive tools for conditioning armed group behavior —international or domestic—remain insufficient.4

Beyond Central Africa and the region, the underlying condition for MINUSCA to function is UN Security Council agreement. Without this foundation, no peacekeeping mission will succeed. The emerging tensions between the P-5 members ignore the underlying, important common interests they share. Central Africa is a poor country—its riches are hard to access, especially as long as warlordism reigns. All P-5 members support the current political leadership; agree that stabilization and peace are important collective goods; and share a common interest in curbing violent religious extremism and terrorism. Cooperation is still possible, and remains a necessary condition for eventual peace in the Central African Republic.

Overall, despite many challenges, MINUSCA has demonstrated effectiveness in averting large-scale civilian death, and helping to extend state authority. However, the end of the mission is not insight. In terms of monopolizing legitimate violence, MINUSCA, the FACA, and the armed groups all remain weak. Although MINUSCA is beginning to make headway in protecting civilians using a robust posture, it is difficult to ignore that the mission was most effective when accompanied by an actual military presence. The most recent, large, multidimensional missions that successfully implemented their mandates and exited (from Eastern Slavonia/Croatia, Timor Leste, Sierra Leone, Côte d’Ivoire, and Liberia), all enjoyed formal, parallel military forces that provided spoilers with clear consequences for violent behavior. The question remains, which country or coalition will provide this necessary parallel force to MINUSCA?

Lise Howard is a tenured professor of Government at Georgetown University. She is the author of Power in Peacekeeping (Cambridge University Press, 2019). She occasionally tweets @HowardLise.